Slightly More Famous then We Used To Be 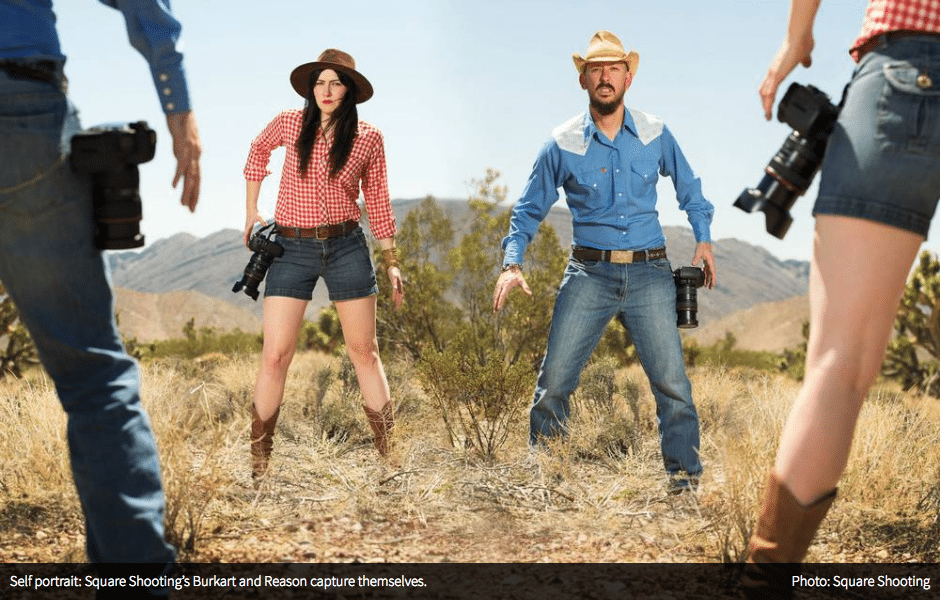 To say the last couple of months have been exciting ones for us Squares would be a like saying Lake Mead is a little low right now. Not only did our much anticipated gallery show of architecture around Downtown Las Vegas finally open at City Hall’s Chamber Gallery, but we also managed to get quite a bit of press about it as well. And if there’s one thing we love more then bicycles and beanie weather, it’s seeing our names in print.

Back on August 12th, before we began the publicity push to get word out about our opening event, we had a really nice interview with the Las Vegas Weekly just to chat about our journey together as photographers and business partners. The magazine even had us do a self portrait to accompany the article, which ended up taking up most of the room in the printed edition. They wanted something ‘with cameras’ so people would know we were photographers, and Jenn came up with a fun gunslinger concept to play around with our company name. We really like how both the self portrait and article turned out, so for your reading pleasure, please check out this link:

Shortly thereafter, we had a great conversation with reporter Jennifer Kleven, who we knew peripherally, but never had the opportunity to really get to know her before she contacted us to chat about In Focus: Downtown Architecture. She was so sweet and as a long time Las Vegas arts scene mainstay, she asked us a ton of great questions about the collection with a sincere enthusiasm that neither of us expected. Her interview came out on the day of the Opening Reception (September 17th, 2015) running in the print version of Vegas Seven magazine and their online presence, appropriately entitled DTLV.

While at the well attended opening reception, we got caught up in a fantastic conversation with long-time arts writer for the Las Vegas Weekly; Kristen Peterson. We’ve been a fan of her coverage of the art community for quite some time, and to have her at our opening was a privilege in itself. But her appreciation of the collection and how she expressed her ‘surprisingly deep connection’ to several of the images completely floored us. She asked us all kinds of earnest questions and furiously scribbled our responses into her notebook. A week later her review of the show came out and we were completely moved at how well she expressed what we felt about the show as artists, but had been finding it difficult to put into the right words when telling people about it.

The last seven weeks or so have been a whirlwind, and we couldn’t be more thankful for the attention our business and our photography has received lately. It’s been a crazy ride since we opened our doors a nearly two and a half years ago, but this rush of publicity that has come our way lately has been completely invigorating.

But of course, we are nowhere near satisfied just yet. In fact, we like to think we are just starting to gain momentum. Can’t wait to see what this wild ride has in store for us next!

UPDATE! On November 3rd our interview on KNPR’s State of Nevada aired in which we got to discuss our love of this project and some of our techniques that were used in the process. You can hear the entire interview here: