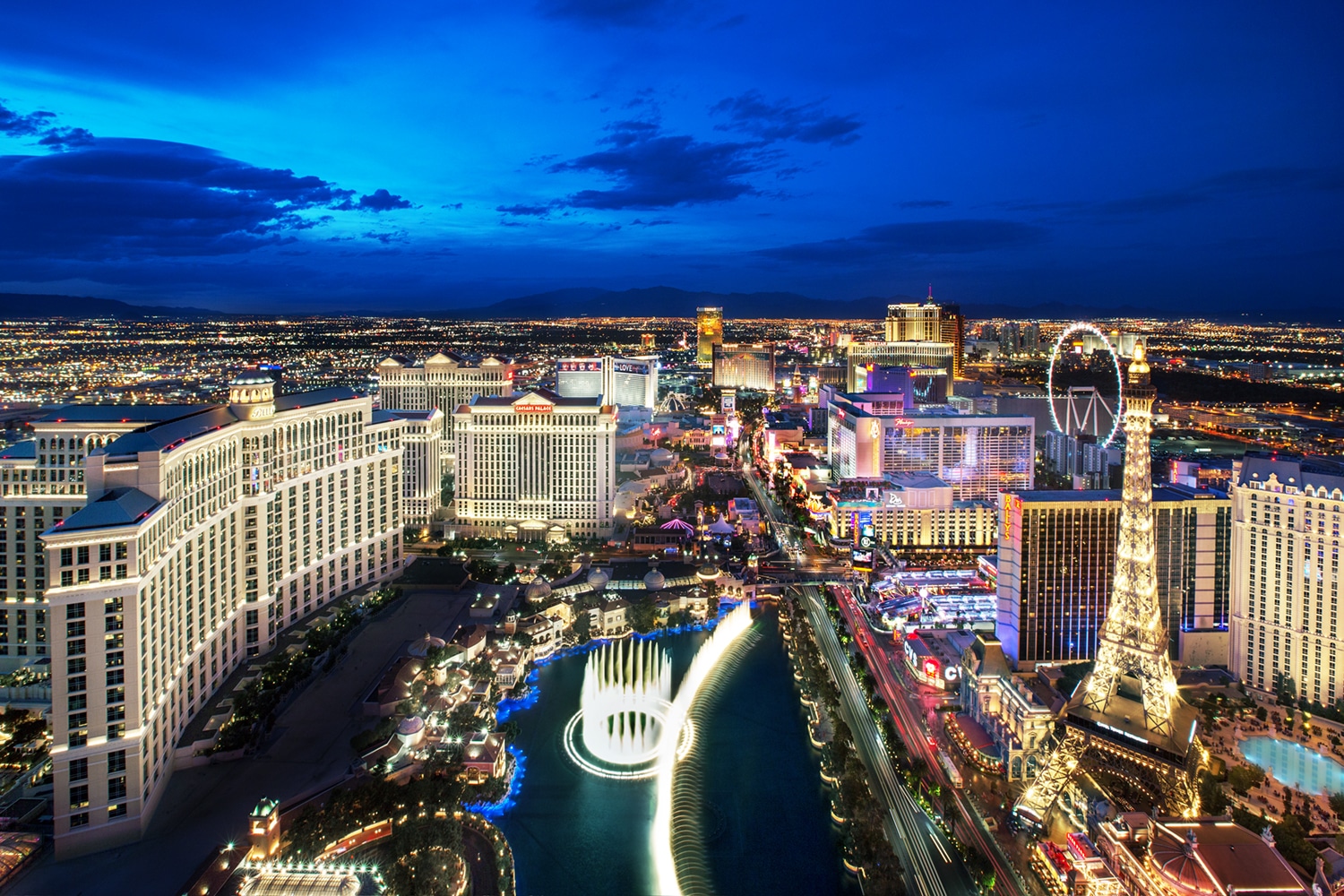 Las Vegas is home of glitzy lights and big-winning slot machine sounds. Las Vegas is also where you can find Nellis Air Force Base which sits on the far north east side of the Las Vegas valley. Home to the Thunderbirds, the Air Force’s premier demonstration squadron. Nellis Air Force Base is the host to more military flight squadrons than any other Air Force base. Given the vast amounts of open desert surrounding the base, Nellis hosts several air combat and training exercises.  Attracting the best soldiers the Air Force has to offer. One of the top trainers at the base was Colonel Adrian Spain. 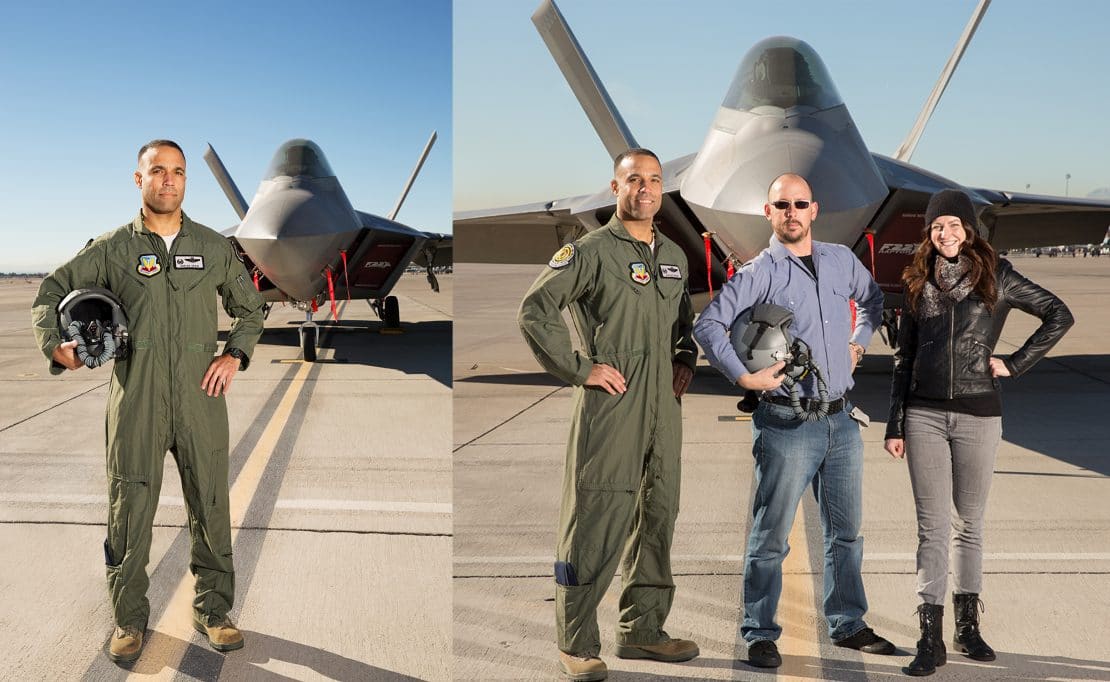 At the time we met him, Colonel Spain (now Brigadier General Spain) was the Commandant of the United States Air Force Weapons School at Nellis Air Force Base. Flight Training Magazine sought out professional Las Vegas photographers to capture a strong and compelling image of Colonel Spain.  The image would accompany an article written about his accomplishments as a high level flight trainer within the military. In their search for professional Las Vegas photographers, they contacted Square Shooting.  We gladly accepted this assignment, happy to help the magazine accomplish their goals. 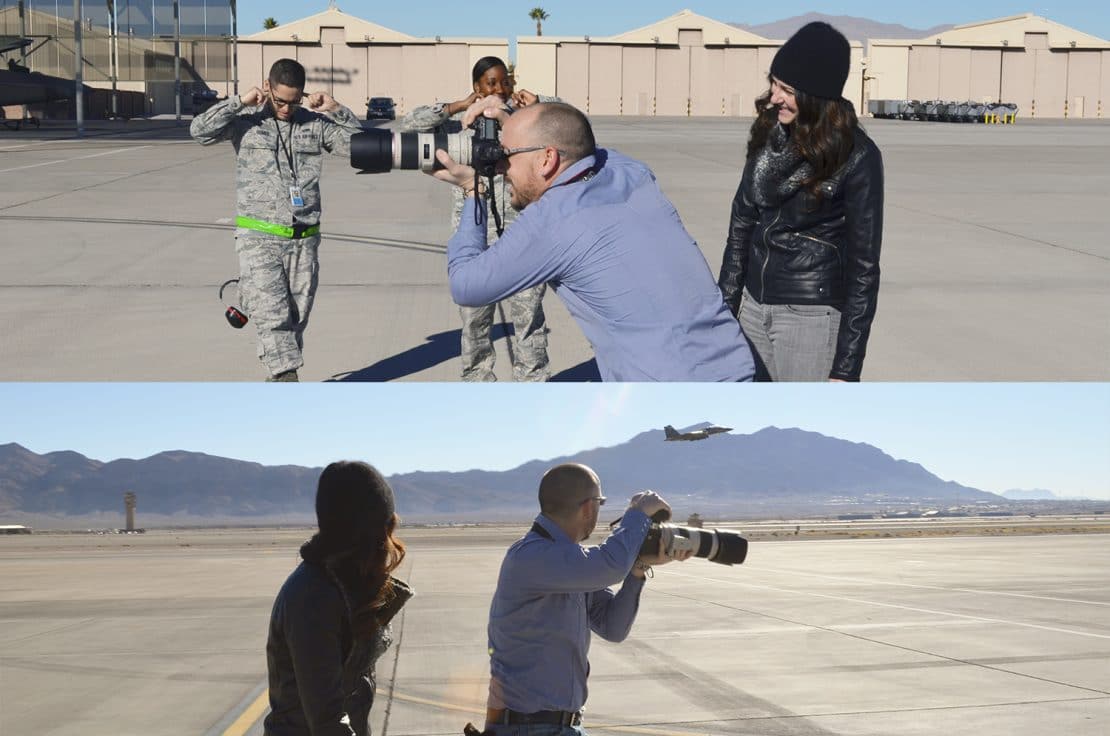 Passing through the tight security from the military police, we then moved to the flight school offices. This is where we would wait to meet Colonel Spain. He greeted us donning his flight suit, a warm smile, and a reserved friendliness. Most likely gained from his lifelong career in the military. Then we shuttled out onto the runway where a F-22 Raptor sat awaiting us to capture it’s good side. During the session, a series of military jets were launching into the air at deafening, bone-rattling speeds. Adding to the rare experience that these Las Vegas Photographers will never forget.

One of the latest editions to the Las Vegas skyline is the High Roller Observation Wheel at the Linq resort. The common term of ‘ferris wheel’ does not provide enough gravity to properly describe the 550 foot tall, 520 foot wide attraction. Currently ranked as the tallest of its kind in the world. The 28 glass passenger cabins around its rim each hold up to forty people comfortably. Allowing guests to take in one of the best views of Las Vegas during a thirty minute ride.

Still under construction, Vegas Magazine sought out the services of professional Las Vegas photographers Square Shooting to capture an image of  the General Manager of Linq High Roller, Eric Eberhart. Before the shoot, we scouted the location to find the best vantage point. Looking to secure the ideal location to photograph Mr. Eberhart with the High Roller. 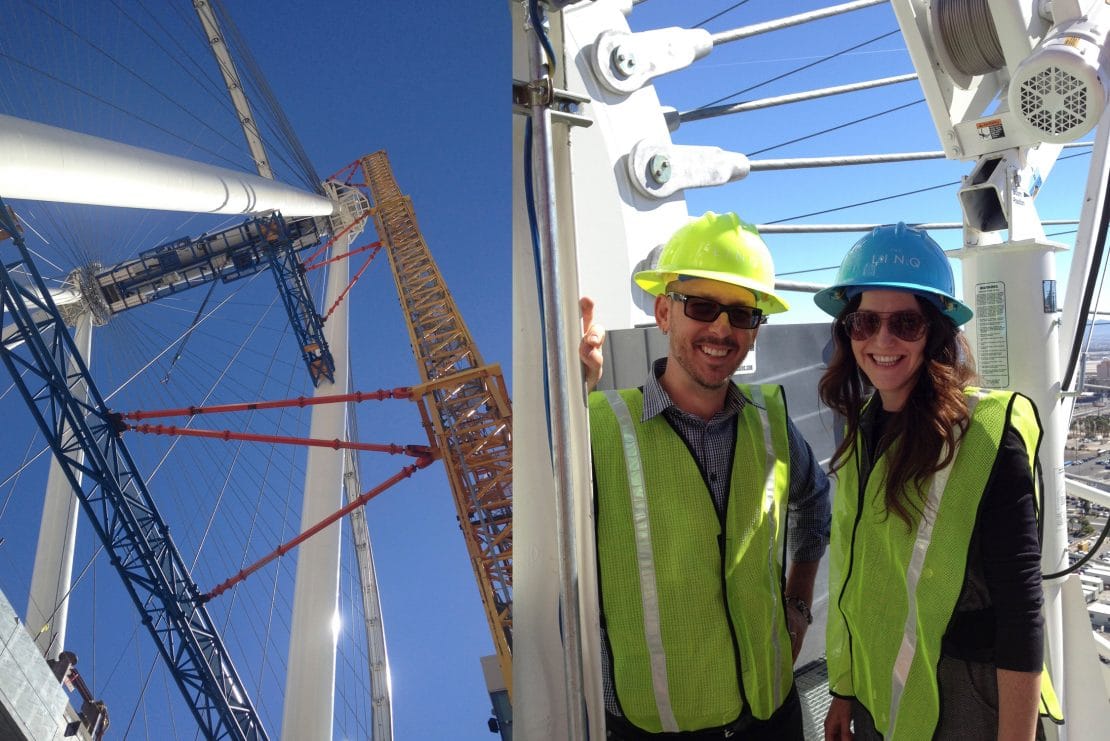 We reviewed a few different spots on the ground, and the foreman decided maybe it would be best if we went up to the hub of the massive wheel. Perhaps we could capture our image of Eric Eberhart from that vantage point. With one of us excited and the other of us terrified of heights, we stepped into a small steel cage. This cage was inside a narrow, square-shaped tube that the construction crew assured us was the best construction elevator they had ever built. With the straining sound of the motor putting forth its best effort, we rattled our way up into the air.

Up and up the no-frills human sized birdcage lifted us until finally coming to an abrupt stop at the center of the High Roller. The door clanged opened and we stepped out onto a catwalk-like space no larger than a picnic table. This platform seemed to be floating 275 feet in the air. Just a few short steps from the elevator was an eight foot tall tube which could be crawled through to reach the landing on the other side of the High Roller, when needed to be accessed by the construction and maintenance teams. 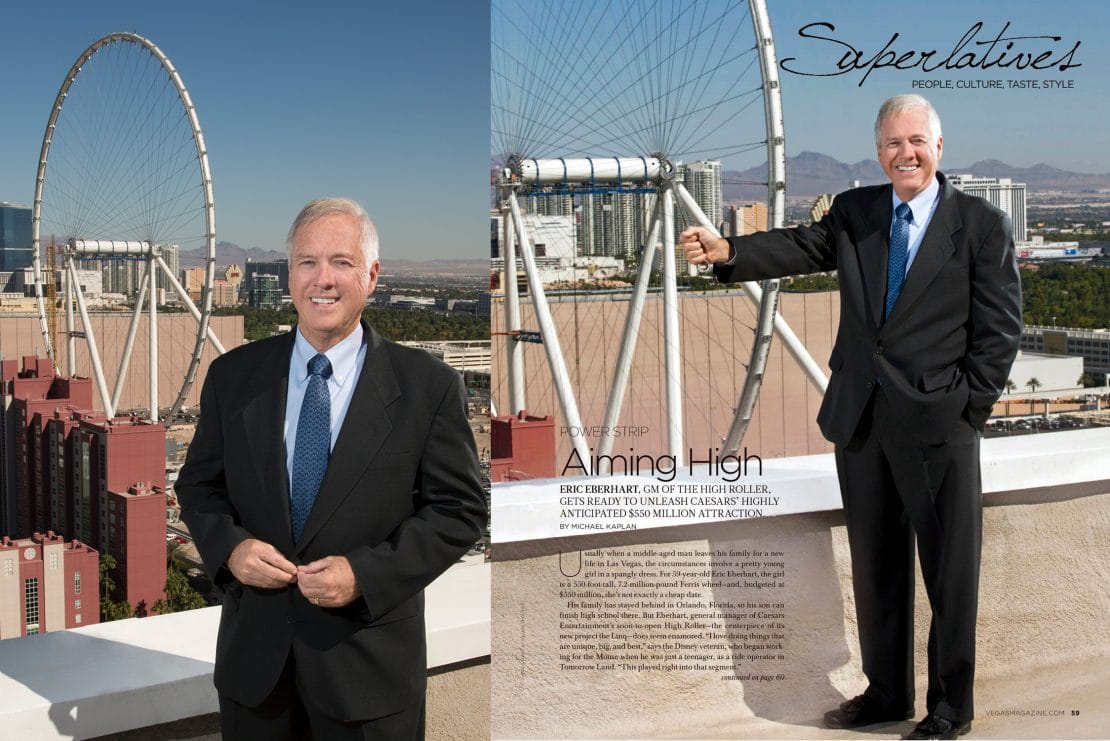 This dead center point of the massive wheel was disorienting in its distance from the ground. The rim where the pods would be attached, which were over two hundred feet away, seemed merely inches from where we stood. Certainly a once in a lifetime experience for these Las Vegas Photographers. We decided that this vantage point would not be ideal for the image we were looking to create. Instead, we set to meet Eric Eberhart on the roof of the 26 story Bally’s hotel a couple days later. This perspective was much stronger to show both the person and the soon-to-be newest attraction on the Las Vegas Strip.

The Cirque Du Soleil brand is intertwined with Las Vegas so much that you can’t have one without the other. Their seventh show on the Las Vegas Strip opening later this year, the Quebec-based entertainment company has been delighting audiences for years. They have been expanding the perception of how a performance-based show can be done. Their most popular show, entitled ‘LOVE’, performs in the specifically built theater at the Mirage. It combines the re-produced and re-imagined music of the Beatles with an interpretive, circus-based artistic and athletic stage performance.

Dance Magazine sought out professional Las Vegas Photographers Square Shooting to create a collection of images to accompany an article they wrote. Square Shooting was tasked with capturing a ‘day in the life’ of the dancers in the show. The vision for the project was to provide a glimpse into the backstage rehearsals the dancers undergo before the show. Then follow them through costume and make up session, all the way to the moment they stepped through the curtains. These Las Vegas Photographers were only too eager to step into the world of Cirque Du Soleil. Excited to capture the hard work, imagination, grace, and concepts that go into one of the most popular shows on the Las Vegas Strip.

For the past 36 years, The New American Home project has been a highlight of the International Builders Show. Each year, the top construction companies from the National Association of Home Builders join forces to create a showcase home. The Home features each suppliers’ latest technology, techniques, and craftsmanship. The finished luxury home will then have guests bussed to the location during the week of the IBS convention. This allows them to tour the property to get up close and personal with The New American Home.

For the 2019 convention, Sun West Custom Homes was selected to design and construct a 8,226 square foot show home. It is located up in the hills of Henderson, inside Nevada’s Ascaya neighborhood. The finished New American Home is a spectacular and captivating example of a modern home in the 21st century. Complete with floor to ceiling glass walls that tuck away to make the entire house an indoor/outdoor living environment. It also has a number of custom fireplaces both inside and out. The greatest highlight is an envy-inducing infinity pool that overlooks the Las Vegas Strip off in the distance.

Las Vegas Photographers Square Shooting were contacted by PABCO Gypsum, who supplied, shaped, and installed the drywall elements of the project. Our company set out to capture architectural photography of the house for their marketing and advertising needs. We here at Square Shooting absolutely love architectural photography, so we were thrilled to capture this magnificent beauty. We spent several hours selecting the best angles in each room to convey the home’s glamour, quality, and unique characteristics. Being able to apply our craft in a six and a half million dollar home was high on our list of unforgettable assignments as Las Vegas Photographers.

Penthouse at the Cosmopolitan

It’s believed that Las Vegas has more hotel rooms than all of Europe combined. Which is only difficult to believe until you take your first walk down the entire four and a half mile long Las Vegas Strip. The nearly one hundred and fifty thousand rooms becomes very clear rather quickly. Of course, not all hotel rooms are created equal, especially in a city with so many tourists gambling for big stakes.

The Las Vegas Convention and Visitors Authority is the organization in charge of attracting visitors by promoting Las Vegas as the world’s most desirable destination for leisure and business travel. The now world-famous ‘What Happens in Vegas…’ campaign is a successful contribution the LVCVA put together for this mission.

The LVCVA reached out to Square Shooting, seeking Las Vegas Photographers to create a collection of portraits for the Las Vegas Convention and Visitors Authority executive directors. The vision was to find an ideal backdrop that would instantly connect the viewer with a sense of the energy that is Las Vegas. While the Las Vegas Sign and the Neon Museum were considered, it was a view of the Strip that was most desirable. With the best views of the strip available from the Penthouse suites at the Cosmopolitan.

At the top four floors of the 71 story tower sits a collection of 21, invite-only, suites catering specifically to high-rollers willing to bet a minimum of one million dollars. Each conceived by one of three famed design firms: Daun Curry, Richmond International, or Tihany Design. Floor to ceiling windows and glass doors in every room allow the visitor to step out onto a glass walled balcony. This vantage point provides incredible views in every direction as you sit high above the tourists taking in the Bellagio fountains far below.

Our objective for this assignment; capture fifteen LVCVA executives, each person photographed twice. Once with a daylight view of the Strip, and then again with a night time view. The team of four make up artists setup in one of the two massive spa-style bathrooms that the suite had to offer. Square Shooting team proceeded to set up two photography bays in the bedrooms. Keeping a close eye on the shadows below spreading across the Strip to ensure we captured the portraits at just the right time. When the lighting was just right, we had the executives line up on the glass walled balcony at one of the two stations.

Cameras and lighting aimed out of the sliding glass doors of each bedroom, allowing each person to step into the doorway for their moment of capture. As the earth rotated and the world-famous lights of the Strip began to come to life, we repeated the process a second time. With this we could create the night backdrop the client was seeking for their additional collection of executive portraits. The process was smooth and became the perfect collection of portraits for the team.

We may just have the best job ever!

Without a doubt, being Las Vegas Photographers has led the team of Jennifer Burkart and Ryan Reason on a variety of adventures and experiences. These highlights are definitely some of our favorites, but each assignment that comes our way just might be our next exciting opportunity. A chance to be somewhere or do something that we never expected the day before. And we couldn’t be more eager to see what that might be!